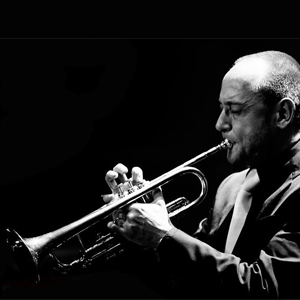 With his distinctive sound and energetic and lyrical approach, Rotterdam-based trumpet player Jan van Duikeren (1975) now ranks among a new generation of prominent musicians in the Dutch music scene. His extensive musical interests and outstanding versatility have ensured his success as a much sought-after solo player and side-man. This popularity has secured him an impressive array of musical outings with leading artists and bands representing virtually all musical genres.

Beside the busy schedule with the Special Request Horns, Jan is currently playing with:

FINGERPRINT, Jan’s own band which features some of the best Dutch jazz and funk players.

Candy Dulfer, with whom he has been touring the main stages of the world for more than 16 years now. Jan is also responsible for a large portion of Candy’s brass arrangements as well as some compositions.

The Jazz Orchestra of the Concertgebouw. Jan’s compositions and solos are featured on the CD Scribblin’, available on Challenge Music.

Compositions by Jan are played within all of these projects.

Jan is also guest teacher at the conservatories of Rotterdam and The Hague, and also teaches at the Music Academy Haarlem.