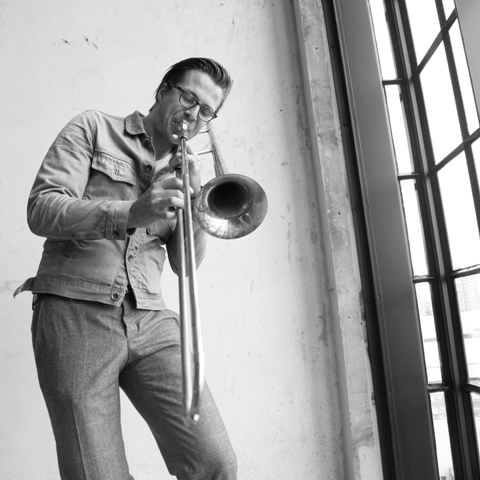 started playing the trombone at the age of only five years old, switching to guitar and piano as a teenager. He later returned to his first instrument and started to study jazz trombone at the conservatory in Tilburg which he left two years later to study with Bart van Lier in Rotterdam. Louk graduated from the Rotterdam conservatory in 2002 with great honours. In 2001 he won the Erasmus jazz-prize and played in Carnegie Hall, NY with his B&W quintet. Together with Rob van de Wouw, Louk has been initiating all kinds of musical projects like the B&W quintet and since 2004 the Rotterdam Jazz Orchestra (playing with the likes of Carla Bley, Steve Swallow, Frank Lacy, Jason Lindner, Frank Moebus, Nicholas Payton, Mark de Clive Lowe, Benjamin Herman, Eric Vloeimans, Ernst Reijseger, Anton Goudsmit and so on). In 2003 he is asked (together with Jan van Duikeren and Benjamin Herman) to join Paul Weller’s band for a couple of big European tours as well as recording the cd’s Studio 150 and As is Now. Together with fellow horn players Jan van Duikeren and Guido Nijs he forms The Special Request Horns, playing with Dutch pop/reggae stars BEEF! and releasing their own funk/jazz album Volume 1. The Special Request Horns since then have been touring and recording with the likes of Lionel Richie, Diana Ross, Candy Dulfer, Marco Borsato, Dutch chart breaking singer Caro Emerald and many others.

Together with guitarist Anton Goudsmit and saxophone player Nils van Haften he formed a trio in 2014.

Besides his playing Louk is a passionate and productive composer as well. FULLDUPLEXX, the trio and the NRJO are his main musical vehicles for which he’s currently composing.